History of the Lieutenancy

Northamptonshire features very early in the history of the Lieutenancy and we can be justifiably proud of the County’s presence and influence in some significant periods in England’s history.

Thanks to the survival and publication of ‘musters’ books kept in the late Elizabethan and Jacobean period, augmented by a set of papers relating to the period of the Lieutenancy of Sir Christopher Hatton (1586-1591), we know a good deal about the early history and activities of the Lieutenancy.

The Lieutenancy originated in the reign of Henry VIII when the need was felt to have a more effective means of raising emergency forces at times of internal revolts and external threats. William Parr, Marquess of Northampton, brother of Queen Katherine, Henry VIII’s last wife, was appointed as the first Lord-Lieutenant in the county of Northamptonshire in 1549. He was also appointed to serve in the counties of Cambridgeshire, Huntingdonshire, Bedfordshire and Norfolk. The majority of Lieutenancies date from 1585, and, as in the case of William Parr, multiple roles were quite common.

These early commissions did not provide for Deputies nor were they for a single County or for life. Lord Northampton was in fact reappointed Lord-Lieutenant several times and it was in one of the last of his commissions that Deputies were first named (1569). However, as this commission was cancelled in 1570, they did not hold office for long, though there had been work to do in helping to raise men to deal with the Northern Rebellion of that year.

The next Lord-Lieutenant was Sir Christopher Hatton [of Holdenby House] after whom there was again a gap until the continuous series of Lord-Lieutenants began with the appointment in 1603 of Thomas Cecil, 2nd Lord Burghley (created Earl of Exeter in 1605).

A crisis occurred in Sir Christopher Hatton’s Lieutenancy when the safety of the realm was threatened by the Armada in 1588. 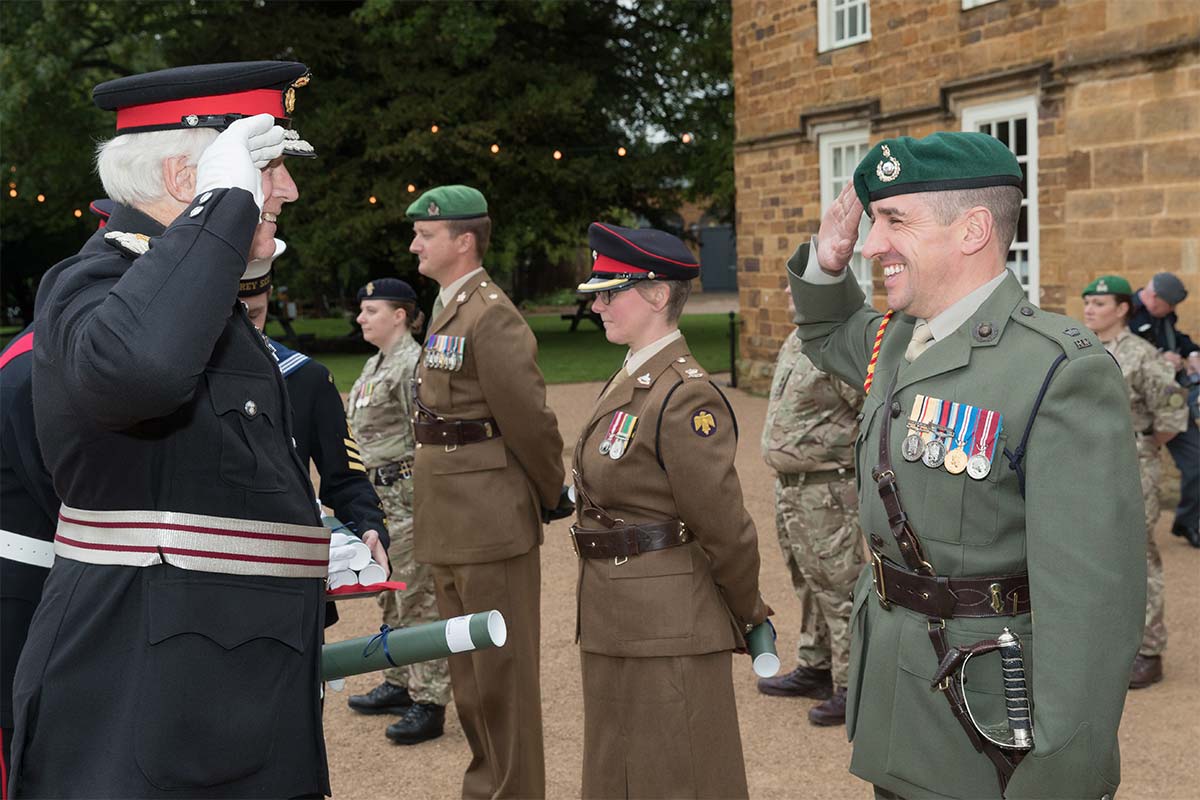 Since Sir Christopher Hatton was so much occupied at Court, it fell wholly to his two surviving Deputy Lieutenants (the third, Sir John Spencer had died), Sir Richard Knightley of Fawsley and Sir Edward Montagu of Boughton, to raise the County quota of footmen, 400 of whom were to be marched up to the outskirts of London to join Lord Hunsdon’s army to defend the Queen’s person. Their effort did not go unacknowledged for as soon as the danger was past, the Council in London sent down a letter ‘greatly commending the Lord-Lieutenant’s care and diligence and travail of his Deputy Lieutenants yielding to him and them the Queen’s princely thanks in that behalf’. Nevertheless, it has to be recorded that there was even in those days a tension between the government and the County, as the County needed to be pushed to provide its full quota.

The numbers of Deputy Lieutenants were gradually increased, the Crown tacitly permitting the Lord-Lieutenants to select and appoint them whilst ceasing to include their names in the Lieutenants’ own commissions.

The men appointed as Deputy Lieutenants were among the leading men of the County. They were the same men who were commissioners of musters and Justices of the Peace and therefore carried out administrative duties connected with the local military forces in the intervals between Lieutenancies.

All the well-known names occur – Spencer, Montagu, Knightley, Brudenell, Fermor, Isham, Cecil, Fitzwilliam, Watson, descendants of most of whom still live in the County.

The normal duties of the Deputy Lieutenants, which were governed by a statute of Queen Mary (1558), were to assist in managing the annual training of the Militia (to use a word that was only just coming into use). This entailed seeing that there were named men available with suitable arms in each village, summoning them through the high constables of the hundreds (who passed on the summons to the petty constables of each township or village) to assemble at a specified place for the training and, as with any administrative process, seeing that the accounts were kept and the necessary payments made. Sending the summonses cost money, as did the pay of the officers and men and their powder. The Deputy Lieutenants also had to see that the clergy, gentry and landed classes provided their quota of armour, weapons and horses. All this involved keeping detailed lists or muster books for every parish in each of the two halves (east and west) into which the County was divided.

It must be remembered that all through Tudor and Stuart times there was a series of scares or crises, many connected with religious disaffection, for example, the Gunpowder Plot. At such times the Deputy Lieutenants had many unpleasant duties to perform, such as searching neighbouring squires’ houses for arms.

Although the musters were meant to be annual, there were many years in which they were not held. In 1621, for instance, it was too wet. Then with the onset of the Civil War counties sometimes split and there could be both Royalist and Parliamentary Deputy Lieutenants.

Henry, Lord Spencer, in June 1642 appointed his own Lieutenants, including Zouch Tate of Delapre, a strong Parliamentarian and member of the Long Parliament, whilst Charles I resorted to an earlier system of calling out men for military service by commissions of array.

It would be foolish to think that Lord-Lieutenants, and consequently the Deputies they appointed, were entirely without political affiliations which sometimes affected their work and it is only more recently that emphasis has been placed on the holder of the office of Lieutenant being, like the Queen, above politics.

With the restoration in 1660, Northamptonshire, for the one and only time, had two joint Lord-Lieutenants, the Earl of Exeter and the Earl of Westmorland. Amongst their first Deputies was Sir Justinian Isham to whom it fell to secure Northampton for Charles II and two years’ later to see that the walls were demolished. He and his fellow Deputies, had received a copy of the instructions to resuscitate the Militia in order ‘to prevent or suppress any tumults, insurrections or disorders which unquiet and factious spirits may design to contrive’. They were to prevent them meeting or privately getting any store or arms into their hands. They were to disarm all such as were in any charge or employment under the usurping powers against his late Majesty (Charles I) or his son.

There were a number of wars, and also plots, during the reigns of Charles II and James II and on each occasion the Deputy Lieutenants came into their own. For instance, in 1672, for one Dutch War, they had to assist the Lord-Lieutenant in impressing men for the fleet. Regular annual musters were held involving them, or at least some of them, in the same sort of administrative work as had been necessary in the earlier years of the century and there were quite often time consuming details to be sorted out. One example of 1682, taken from the papers of Sir Thomas Samwell of Upton (1646-1694) an active Deputy Lieutenant of this period, may serve as an example – ‘ordered by the Deputy Lieutenants that Mr Hutton, the Minister of Farthingstone, do find a fourth part of a Militia horse and arms with Mr Adams of Charwelton and that he be discharged of his foot arms at Farthingstone and Hannington.’

Annual training and levies to pay for them continued to be made until after the Revolution of 1688 and it seems that the Jacobite Rebellion of 1715 coinciding with the appointment of John, Duke of Montagu, as the new Lord-Lieutenant, led to his immediately setting about giving orders to put the whole Militia of the county into a posture of readiness to meet this threat. Once this was over there was a long period of internal peace and although local noblemen raised regiments to defend the country in 1745, the Militia system fell into desuetude until it was revived in 1756.

The Militia Act 1756, passed during the time of the Seven Years’ War with France, inaugurated a new era. It removed from owners of property the liability to provide the cavalry and pay for the foot, and brought into existence the General Meeting of the Lieutenancy, and split Counties into sub-divisions for Militia purposes. For the first time an official Clerk was appointed.

The Act also regularised the use of Militiamen outside England, a force of Militiamen being first embodied in 1778. Further embodiments resulted from the upheavals which followed the French Revolution of 1789 and the emergence of Napoleon, and additional men were raised under the Defence of the Realm Act 1796 which once again gave the Justices of the Peace a role to play at the sub-division meetings. The way in which the names of able bodied men between 18 and 45 were obtained from the parishes in Northamptonshire and sufficient men chosen from these lists, is described in the introduction to ‘Northamptonshire Militia Lists 1777’.

It was at this time that three Deputy Lieutenants (Sir George Robinson of Cranford, Sir William Dolben of Finedon and John Harvey Thursby of Abington) were appointed to act in the absence of the Lord-Lieutenant Spencer Compton, Earl of Northampton, then residing in Switzerland. He was alleged to be recovering his family’s fortunes after the ruinous expenses of the famous Northampton Parliament election contest of 1768 but was in fact seriously ill. A more frequently resorted to device which still obtains in these circumstances was to appoint a Vice Lieutenant, as was done when William Ralph Cartwright of Aynho served in place of a later Marquess of Northampton in 1828.

Although the Militia was disembodied in 1814 and a long peace succeeded Napoleon’s downfall, the machinery for selection and annual training was kept in being. From time to time difficulties did arise, as in 1831 at the time of the agricultural riots, when it was discovered that in some divisions almost the whole eligible male population had been sworn as special constables. As this exempted them from being balloted to serve in the Militia, there was nobody left to do so.

A new Militia Act was passed in 1852 and once again the system was revitalised. The Lord-Lieutenant, the Marquess of Exeter, held meetings of the general Lieutenancy and invited the Deputy Lieutenants to discuss the best mode of complying with new rules and regulations he had received from the Secretary of State and in particular how to raise the prescribed quota of 606 men. Within a fortnight he had 494 volunteers and two years later the Militia was again embodied to meet the needs that arose through the outbreak of the Crimean War and afterwards of the Indian Mutiny. A more local difficulty in 1854 was the bothersome question of providing a better Militia storehouse but in this case the Deputy Lieutenants were able to shift the responsibility from their own shoulders on to those of the Justices who alone had the means of raising money to pay for it. It occupied a Committee for years.

Cardwell’s Army reforms of the 1870’s put an end to the control of 18the Militia, Yeomanry and volunteer forces by the Lord-Lieutenants and reduced the duties of his Deputies, though for some years they maintained a close interest in the Territorial Army in its various forms and its Association. Indeed the insistence upon Deputy Lieutenants having held commissioned rank for a number of years, or having an interest in the auxiliary forces, has ensured that the Lieutenancy as a body retains a military outlook and preserves its closest connection with the original purposes of the institution.

Not until 1921 did the Lord-Lieutenant finally lose the power to call on all able-bodied men of the County to fight in case of need. Nevertheless, since the repeal of the Militia Act in 1918 and the passing of the Deputy Lieutenants Act of the same year, the office of Deputy Lieutenant may primarily be regarded as an honour. It is a mark of the Lord-Lieutenant’s confidence in an individual and no appointment can be made until the name has been submitted to and approved by the Queen.